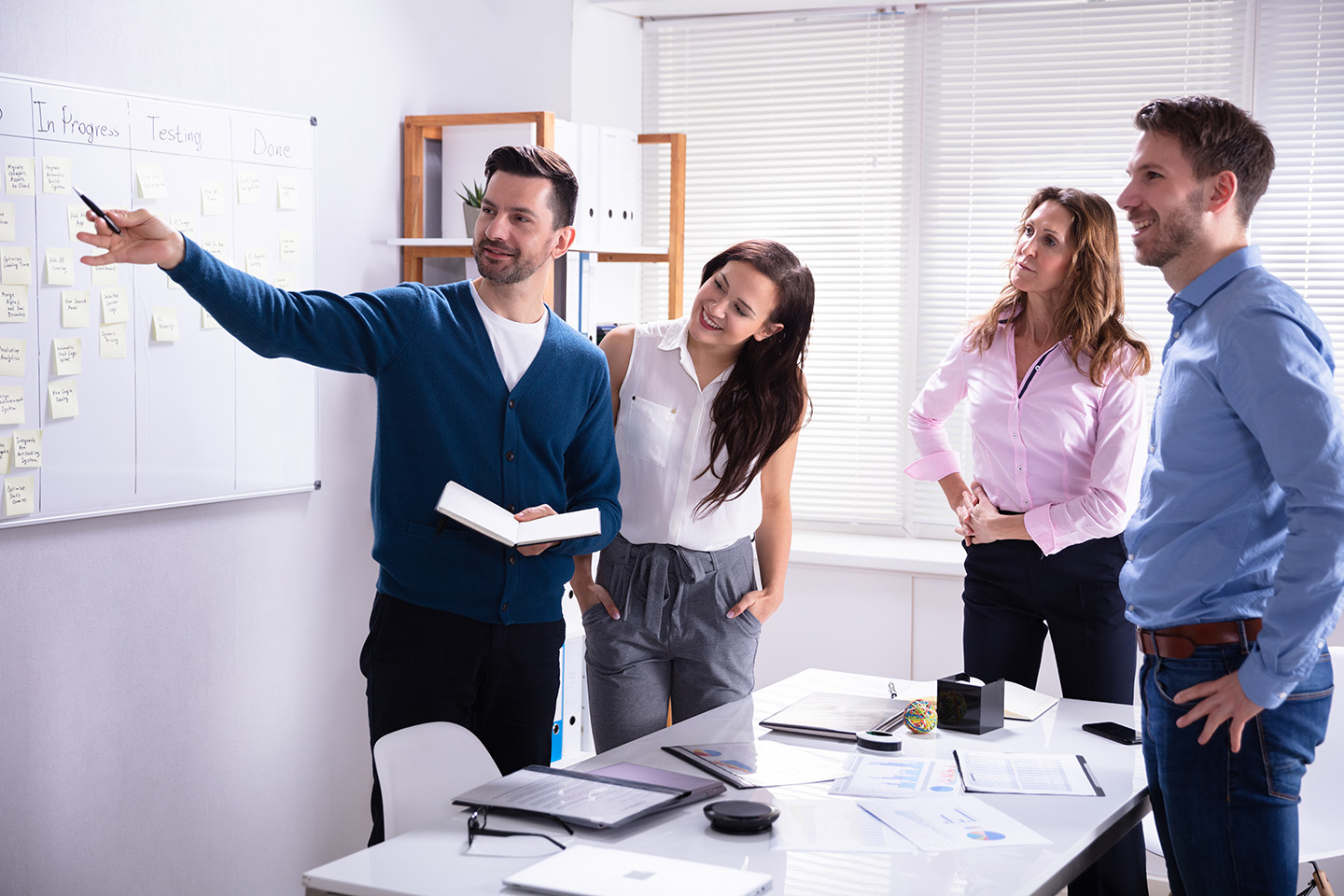 If you work in a team, for example as a developer or a manager, you certainly have felt that “things” can be improved. “Things” always differ in the current situation, but it is very probable that it had something to do with communication flow, assignment of work or just keeping the team on track in terms of what is going on. And in that very moment you might have heard to “just use SCRUM”.

And while this is being true, it is very important to understand what SCRUM is and how easily it can be implemented in an organization or within any team that is on a course to accomplish a goal.

In this article you’ll learn what SCRUM means, how it can improve your team/organization and also, what are the integral parts of SCRUM.

On which occasions is SCRUM useful?

SCRUM is based on the empirical theory or empiricism. It simply means, that main source of the knowledge is your experience and the decisions are mainly based on that which we already know – this is also true for project management in general.

What you should know before diving into SCRUM?

Even though SCRUM framework has its integral tangible parts, it is very important to understand that they originate in the pack of pillars and values that holds everything together. It is just a theoretical concept, but understanding it will allow you to see, how SCRUM can improve your team efforts.

Values as they can be described as intangible guides, are also important part of the SCRUM approach.

The Scrum Team commits to achieving its goals and to supporting each other. Their primary focus is on the work of the Sprint to make the best possible progress toward these goals. The Scrum Team and its stakeholders are open about the work and the challenges. Scrum Team members respect each other to be capable, independent people, and are respected as such by the people with whom they work. The Scrum Team members have the courage to do the right thing, to work on tough problems.

What SCRUM consists of?

The SCRUM framework has its integral parts. It is 3 parts that are as follows:

The SCRUM team is the integral part of the whole concept. it consists of people who are in charge of the project and do the actual work in a systematic manner.

In order to do the work, the team members are assigned so called “scrum roles”. The roles tells us, that every single person within the team has their own role and their own responsibilities.

The SCRUM roles are as follows:

Product owner in the SCRUM team is in charge of the outcome. He is responsible to deliver the value that is being created via the product. Their role can be compared to one of the project manager.

Product owner must know about the product and the benefits it should bring to the final customer. The product benefits are depicted in the form of a user story and are placed in so called Product backlog or Sprint backlog (more on this topic later) – which is one of the responsibilities of the product owner.

In order for the product owner to succeed in their role, the most important quality they can have is to be supported from the upper management. Once this criterion is not met – is very probable that the person undertaking this role will not last long or the project will eventually fail.

Scrum master is a role given to a person, who is in charge of supervision of the SCRUM practices being adhered to. They help everyone within the team to understand the basics of SCRUM, its procedures and methods.

Their responsibility is to communicate changes that increase productivity within the scrum team.

The development or production team consists of experts who work on the delivery. Every single member of the development team has their own specialization, but they are responsible for each other as a whole.

The team size should not be too narrow, nor too wide. If the size being to narrow, it is impossible to do the quality work, because there are skills missing and it needs to be compensated by a person who might not know a lot about the subject. And while the size being to wide, the people can interfere each other in doing the work they specialize in.

Product owner, nor Scrum master aren’t a part of the development team.

SCRUM events are regular meetings that allow the team to stay on the track, support information flow and create an opportunity to inspect the work. The idea behind the SCRUM events is that they should be swift meetings with prepared agenda. Also the SCRUM meetings should not be prolonged and should eliminate a need to conduct any additional meetings that are not a part of the SCRUM framework.

But first and foremost, let’s talk about the sprint.

The Sprint is a term denoting a limited-time-block during which the work is being done. It is usually a single week, a two-week period or the whole month.

Each sprint have its own characteristics, that are as follows:

Let’s get back to the SCRUM events. The described events are as follows:

Is a type of meeting during which an answer to the following question is being sought:

What can be delivered within the increment?

During the sprint planning a sprint goal is defined.

Is a type of very quick (ideally 15-minute) meeting where the work is being planned for the next 24 hours (or for the next working day).

A participants of this meeting is a scrum master and the development team. Product owner does not participate.

The members of the development team got a chance to inform other participants on the progress of their work by answering the following questions:

Of course, such questions can be modified to fit your team preferences, but the basic premise should stay the same.

PRO TIP: In case you are interested in conducting daily scrums directly in Jira, try one of our Jira addons -> Daily Standups for Jira.

Is a type of a meeting that is being held at the end of each sprint to inspect the increment.

The participants are the whole scrum team and stakeholders, i.e. people who are interested in the outcome of the product.

The result is refined product backlog.

Is a type of a meeting that offers an opportunity for the scrum team to check if something went wrong during the previous sprint, inspect it and come up with possible solutions how to prevent similar causes in the future.

SCRUM documents or also called artifacts depict the actual work or the value being created. They are specifically created in order to maximize transparency so as every single member of the SCRUM team understands it.

Every document has its own “commitment” – which is a way of expressing what is the document all about.

Is an ordered list of everything, that should be delivered within a product. It is the only “source of truth” about the requirements of the product.

Is also never being finished or finalized, but rather of dynamic nature.

Every single item within the product backlog have its own specific attributes:

Commitment: product goal – describes the future state of the product

Is a set of items picked from the product backlog for the current sprint.

Commitment: sprint goal – is a reason, why the items were selected for the current sprint. Is important for the development team, so as they know what they are working on.

Is a total of all the items finished in the current sprint and within all the past sprints.

Commitment: definition of done – is a description of the state of the product that insinuates it is finished.

How to implement SCRUM?

SCRUM is just an approach or a framework that shows how the work can be managed and coordinated. One of the most popular SCRUM techniques is Agile – the one which you’ve probably heard before.

Your organization or team can start using the SCRUM framework basically right now – the only thing you need is to adhere to the principles and SCRUM parts as defined above.

If you are a bigger organization you might want to look at SCRUM certifications available to ensure the framework is being implemented the correct way.

Hopefully this article introduced you to SCRUM or at least given you an idea, how you company processes can be implemented.